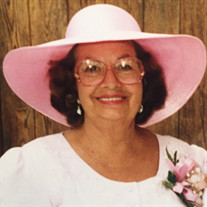 Alda O. Wolfson passed away peacefully after a long battle with Alzheimers Disease on August 20th, 2019, at the age of 93 years old. Raised in Rye, NY, she graduated from Port Chester High School. She met her first husband, Robert Stephan, at the age of 16 while he was hitchhiking in his Air Force pilot uniform. They married shortly after the war and were blessed with two sons, Paul and Gary. During their marriage they spent time living in New York, Connecticut, Vermont and Arizona. After their divorce, Alda met and married her second husband, Martin Clancy, and added three children to her family--her dear twins, Nicholas and Martin, and (after years of trying to have a girl) her beloved daughter, Loran. She resided in Port Chester, NY, until the early-1970s when the family moved to Beachwood, NJ. After she and Matt separated, she met her third husband, Bernard (Bernie) Wolfson, whom she spent the next 37 loving years with, adding two stepchildren, Marty and Steve, to their family. Alda and Bernie moved to and loved their life in Ft. Lauderdale, FL, where they resided until the end of their years. After retiring from Uniflex Rubber Corporation, where Alda was the top salesperson, she shared her love for Disney (going four-times a year) and Ballroom dancing with Bernie. She continued practicing her passion for crafts and quilting, attending craft fairs across South Florida where she enjoyed the camaraderie between makers as much as selling her wares. She fulfilled her lifetime dream of travelling to Paris not once but several times, and loved reflecting upon it for the remainder of her life. In her final years she most enjoyed visits with her grandchildren and family. Alda is pre-deceased by her beloved husband, Bernard (Bernie) Wolfson, his son, Stephan (Steve) Wolfson, and her daughter-in-law, Mary Faso-Stephen. Alda is survived by her loving children--Paul Stephen, Gary Stephen, Martin Clancy, Nicholas Clancy, Loran Clancy-Apgar and Martin Wolfson-- and their spouses--Deirdre Flynn, Scott Apgar and Vanessa Wolfson--as well as 17 grandchildren and 9 great-grandchildren. A memorial service will be held in Fort Lauderdale, FL, on October 5th, 2019, venue to be announced. If you wish to send flowers for the service please do so through Brigitte's Florist, (954) 583-8025, and they will coordinate with the venue.

The family of Alda Wolfson created this Life Tributes page to make it easy to share your memories.

Alda O. Wolfson passed away peacefully after a long battle with...

Send flowers to the Wolfson family.