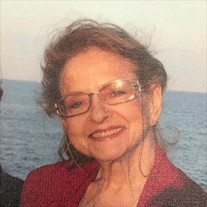 On April 23, 2022 our mother, Barbara Somen Fisher was embraced into eternal life by her beloved husband, Joseph Fisher and her son, Dr. Ron Fisher. She was born on February 10, 1940 to Julius Somen and Anna Kaminansky Somen In New York. She married her childhood sweetheart on Oct, 26 1957 and they spent the next 58 years mapping out a beautiful life together and have many accomplishments to show for it. They raised three children and gave them the best of everything. Not only did they own their own businesses, Aqualand Pets and Sporting Goods, in the Bronx and White Plains, New York and later Aqualand Aquarium in Stuart, Florida; but they also published a magazine known as the Florida Fishing News, after moving to Miami in 1973. Then later in life, when most would be winding down, the two of them went back to school together to earn their Law degree. She is survived by her, daughters, Beth Baxter and Sheryl Fisher Bisch and their husbands, Greg Baxter and Andre Bisch. Grandchildren, Daniel Denson, Benjamin Baxter and wife Maya Baxter, Erin Sloss, Emily Chase and husband Jeremy Chase and Nicole Sloss. Great grandson Aiden Chase. We are very thankful that we had the opportunity to have this woman as our mother, grandmother and great grandmother. It was our honor to be at her side when her journey here on earth came to its completion. Although she is no longer with us, her life, love and memories will remain alive in our hearts forever. A mother’s love never fades. May you rest in eternal peace. Graveside Service will be held on Wednesday, April 27, 2022 at 1:30 pm at Beth David Memorial Gardens, 3201 N 72nd Avenue, Hollywood, Florida 33024. Arrangements by Alexander-Levitt Memorial Chapel (954) 721-2500

On April 23, 2022 our mother, Barbara Somen Fisher was embraced into eternal life by her beloved husband, Joseph Fisher and her son, Dr. Ron Fisher. She was born on February 10, 1940 to Julius Somen and Anna Kaminansky Somen In New York.... View Obituary & Service Information

The family of Barbara Fisher created this Life Tributes page to make it easy to share your memories.

Send flowers to the Fisher family.