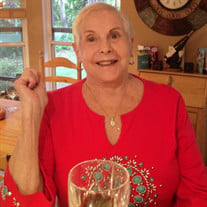 Barbara Adele (Elfman) Sundook passed away peacefully on May 2, 2022, in Delray Beach, Florida. She was born in Dorchester, Massachusetts, on April 15, 1933. She married at 19 and moved to suburban Framingham, where she raised three children, Steve, Jeff, and Janna. In 1975, she found herself on her own. She started a career from scratch without any discernable job skills and moved into her new life. Discovering she had genuine talent in sales, Barbara enthralled potential clients with her gift of alluring conversation. She began her new career in Framingham with well-established Dennison Manufacturing, moving on to Monarch Marking and then Pitney Bowes, where she sold UPC pricing hardware and software to giant retailers in the infancy of the digital world. She was so successful at her fledgling career that she ultimately took a retirement package offered to her in the 90s. Barbara loved the beach, her many friends, her children, and her grandchildren, Jennifer, Ali, Lexi, and Noah. She remained close to her baby sister, Elaine Linsky, of Port St. Lucie, Florida. She enjoyed traveling, shopping on QVC, a good movie, dirty martinis, red wine, and Chinese spareribs. She kept up with politics (including that time the butterfly ballot caused her to vote for Pat Buchannan instead of Al Gore) and could play mean games of mahjong and canasta. She was an active member of Women's American ORT and traveled to Israel with the Jewish Federation of Miami. She left Massachusetts for Florida in the 80s, moving to west Broward and then Boca Raton to live in her dream oceanfront condo. Her younger self at Nantasket Beach would never believe that her dream of living on the beach could one day become a reality. To mark the move to Boca Raton, she sent her friends and family cards that said she was “living la vida loca on the beach in Boca.” And boy did she! Her daughter, Janna, accompanied her for the last several years of her life. They took their “golden girls” act to Delray Beach, where they supported and entertained each other. A straight shooter who always told it like it is, Barbara enjoyed life to the fullest and was truly one of a kind. We will all miss her dearly. Chapel Service Thursday, May 5, 2022 at 2:00 pm at Levitt-Weinstein Beth David Memorial Chapel, 3201 N. 72nd Avenue, Hollywood, Florida 33024. Arrangements by Alexander-Levitt Memorial Chapel (954) 721-2500

Barbara Adele (Elfman) Sundook passed away peacefully on May 2, 2022, in Delray Beach, Florida. She was born in Dorchester, Massachusetts, on April 15, 1933. She married at 19 and moved to suburban Framingham, where she raised three children,... View Obituary & Service Information

The family of Barbara Adele (Elfman) Sundook created this Life Tributes page to make it easy to share your memories.

Barbara Adele (Elfman) Sundook passed away peacefully on May...

Send flowers to the Sundook family.