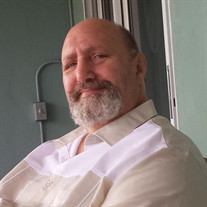 Frederic Mark Stern was born on May 31, 1949, to Phyllis and William Stern in Mt. Vernon, NY. He was named for his grandfather. He passed away on April 22, 2017, in Fort Lauderdale, FL. He was predeceased by older brother, David, and is survived by his wife Lillian, younger sister Andrea, and other loving relatives. As a child, Fred was known as Ricky. He loved his family and was much loved by them, Dinner was always a family time to be together, and mom was a terrific cook. They lived in parts of Westchester County in NY (Mamaroneck, Larchmont, New Rochelle, Mt. Vernon). Ricky had some wonderful times as a child with our grand and great-grandparents, aunts, uncles and cousins. The family always spent a lot of time together. Ricky was curious and bright, interested in many things. He loved to sing and swim, and was very active. Summer days were spent at Rye Beach, Glen Island, and the Colony Beach Club ; Hudson Park was a favored place within walking distance where the boys could play and go fishing. Fred graduated from Mt. Vernon High School, and attended the University of Maryland, majoring in geology. He joined the US Navy and was stationed on a nuclear submarine during the Vietnam era. He was very proud of his service, and told many tales of what it was like living crowded together underwater. Once, when he found out there were a few other Jews on his boat, he convinced his commanding officers to obtain matza and other items so that they could celebrate Passover properly while at sea. His main employment was as a jeweler, goldsmith, and silversmith. His hobbies included Gems and minerals, fossils, American Indian lore, watching baseball and Jeopardy, playing Scrabble, and reading science fiction and fantasy. Fred was generous to a fault. He’d give you anything, do anything for you, and always made you feel how important and loved you were. Once when living in the D.C. area, a brother-in-law phoned that he had missed his plane and wouldn’t be arriving until 2 am, by taxi. Fred jumped in his car and drove to the Baltimore-Washington airport to pick him up. Those were the days before airport security, when one just went straight to the gate. Imagine Marvin’s surprise when he exited the plane and found Fred standing there. That’s the kind of guy Fred was. In fact, he continued giving after his death, as his usable organs were donated so that others might enjoy a better life. Fred did not father any children, but when he married Lillian, he gladly took on the job of grandfather to her two grandchildren, and loved her and them deeply. He began every day telling Lillian how much he loved her, and ended each day the same way. We are grateful for having had him in our life, and we’ll have his memories with us forever.

Frederic Mark Stern was born on May 31, 1949, to Phyllis and William Stern in Mt. Vernon, NY. He was named for his grandfather. He passed away on April 22, 2017, in Fort Lauderdale, FL. He was predeceased by older brother, David, and is... View Obituary & Service Information

The family of Frederic M Stern created this Life Tributes page to make it easy to share your memories.

Send flowers to the Stern family.