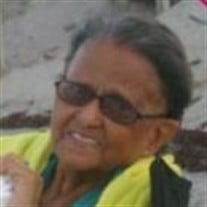 On Friday, December 29, 2017, Jassodra “Rose” Seetaram passed away at the age of 88. Rose was born on May 17, 1929 to Radha & Moolchand Kunjbeharry of Princes town, Trinidad, she married Harry Seetaram on April 7, 1947 and together they had eight beautiful children who were her entire world. She was a dedicated wife, mother and grandmother. Affectionately known as “Tanty” to all family members, she had the role as the strong, fierce matriarch of the family not only to her kids but to her many nieces and nephews. In earlier years, the home she created with her family was often the location of many wonderful memories: parties, holidays, poojas, prayer meetings, Saturday night card games or just the “hangout” place to be. She made everyone feel welcome as soon as they walked through her door. Tanty will be lovingly remembered by her children, Indra, Rookmin (Seeta), Sandra (Balah), Latchman(Kenny), Sookdeo (Robby), Nimchan (Dev) and their spouses, Tony, John, Roger, Adriana (Sankey), Eunice (Hollin), Fran, and Juslin. Grandma will be forever remembered by her sixteen grandchildren, Shaida, Nadeema, Nicole, Joseph, Annadale, Rebecca, Lisa Marie, Victoria, Heather, Robert Rajendra, Shara, Patricia, Vijay, Matthew, Sonia and Nikhil and 11 great grandchildren, Robert, Darren, Katherine, Ryan, Ria, Maya, Nadia, Isaiah, Malinah, Amelia, and Logan. Mamin will also be fondly remembered by her three brothers, Basdeo, Sookdeo, Ramdeo, their spouses and numerous nieces and nephews. She was preceded in death by her sons, Hollin (Deoraj) and Kassie (Sankey), her sister, Utmee and her husband, Harry. The family of Jassodra Seetaram wishes to express our sincere thanks for all expressions of love during our time of bereavement. In lieu of flowers you may send donations to the American Heart Association or American Diabetes Association. http://www.heart.org/HEARTORG http://www.diabetes.org

The family of Jassodra "Rose" Seetaram created this Life Tributes page to make it easy to share your memories.

Send flowers to the Seetaram family.