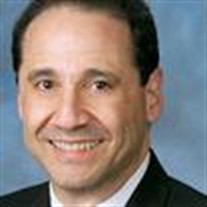 John Abdirkin, 65 , of Tamarac, passed away peacefully on September 6, 2021, surrounded by his family following a brave and valiant 21 year battle with cancer which he faced with much courage and resilience. John was born in Freeport, New York on September 15, 1955 and lived with his family in Massapequa Park , New York where he graduated from high school in 1973. Following his graduation from Syracuse University with a Bachelor Degree in Science in 1977, John spent several years in Italy during which time he became fluent in Italian, traveled throughout Europe and earned a medical degree from the University of Bologna. Dr. Abdirkin joined the faculty of St. Thomas University, School of Science and Technology, in 1996 advancing to the status of full professor before retiring in 2019. During his 23 year tenure at the university, he was instrumental in the planning, development, and inauguration of the “2+2” Nursing Program in partnership with the University of Miami. Dr. Abdirkin is credited in playing a key role in acquiring a $1.5 million endowment to fund Nursing scholarships which allowed over 45 students to earn a BSN degree. He actively participated in a myriad of projects including the Summer Research Institute, the Title V Transformational Leadership grant and served on numerous committees. Dr Abdirkin also traveled with students to Italy, promoting multi-cultural sensitivity and the ability to relate to individuals of diverse experiential backgrounds. In his role as classroom professor, he taught Biology, Anatomy, Physiology, Medical Terminology and Pharmacology along with several on-line education and distance learning courses. Dr. Abdirkin was recognized for teaching excellence based on meticulous preparation and a talent for translating complicated scientific information into elements easy to understand and apply. John and his husband, Doug, traveled extensively throughout Europe, Central and South America, China, Viet Nam, Cambodia, and Mexico. His favorite destination was his beloved Siena, Italy where he last visited in July 2019, reuniting with many dear friends. John is survived by his devoted husband of 25 years, Douglas Carson, mother, Barbara Abdirkin of Tamarac, brother and sister-in-law, David and Isabel Abdirkin of St. James, New York and his sister, Susan Abdirkin of Hamden, Connecticut. He also leaves behind his nephews, Jared Abdirkin and his husband, Dr. Richard Song of Warwick, Rhode Island, Daniel Abdirkin of Boulder, Colorado, Nate Gallant and Noah Gallant of Brooklyn, New York and his great nephew, Jackson Abdirkin Song. John was proceeded in death by his father, Harry Abdirkin in 2019. John, “Ti amiamo” A chapel service will be held on September 9, 2021 at 9:30 a.m. at Alexander-Levitt Funerals & Cremations, 8135 W. McNab Road, Tamarac, FL 33321.

John Abdirkin, 65 , of Tamarac, passed away peacefully on September 6, 2021, surrounded by his family following a brave and valiant 21 year battle with cancer which he faced with much courage and resilience. John was born in Freeport, New York... View Obituary & Service Information

The family of John Abdirkin created this Life Tributes page to make it easy to share your memories.

John Abdirkin, 65 , of Tamarac, passed away peacefully on September...

Send flowers to the Abdirkin family.