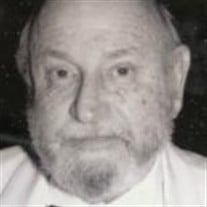 Honorable Jose S. Simonet, surrounded by loving family, peacefully passed away in the Fort Lauderdale area on Sunday, July 4, 2021. He was 88 years old. Judge Simonet was born on April 3, 1933, in Manhattan, New York City, to Jose S. Simonet and Rita Marie Berdeguerre Simonet, and grew up, and lived most of his life, in Miami, FL. He attended the University of Florida, completed his Juris Doctorate (JD) at the University of Miami - School of Law and was admitted to the Bar in 1961. He had an illustrious career as an attorney with the US Department of Justice and US Immigration Naturalization Services, working at offices in San Antonio, TX, Albany, NY, and Miami, FL. He managed the Mariel Boat Lift in 1980 and assisted with the asylum of hundreds of Cuban nationals. He was appointed to the bench as an immigration judge in 1981 and served under Presidents Reagan, Bush and Clinton working in the US Virgin Islands, Puerto Rico, and South Florida. Of note, he was involved in the naturalization of US citizens in the Panama Canal Zone, was instrumental in briefing the White House during the Cuban Missile Crisis, and granted asylum to historic figures such as the Shah of Iran. He also worked as consulting legal counsel on cases involving Manuel Noriega and Elian Gonzalez. He was a chess champion (beating Bobby Fisher), connoisseur of fine wines and food, lover of world travel, opera, and all things Ernest Hemingway. He had a deep respect for the US Constitution and the rule of law. He loved life and will be deeply missed. Jose is preceded in death by parents Jose and Rita Marie Simonet. He is survived by wife Rema Comras, daughter Diane Simonet Kenney (m. Brooke), son Christopher Simonet (m. Cindy), grandchildren Cheyenne Simonet and Montana Simonet (m. Katie), great grandchildren Oliver and Aurora Jean, and nephews David Comras, Manny Comras, Kevin Comras, and niece Joanne Doniloski. A service will be held Friday, July 9, 2021, at 1:00 p.m., at Alexander-Levitt Memorial Chapel, in Tamarac, FL.

The family of Jose S. Simonet created this Life Tributes page to make it easy to share your memories.

Send flowers to the Simonet family.