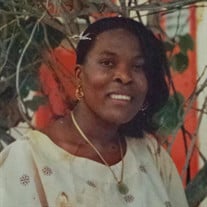 Josie Francois was my mother. She was born to Sionem Predestin and Elizan Guerrier in Cap-Haitien, Haiti in 1961. Surrounded by the love of a very large and tight- knit family, she was the 2nd of 8 children. When she talked to us about her childhood in Haiti, she always spoke lovingly of her father’s love, her mother’s patience, the mischief she and her siblings would get into, the simplicity of growing the food they ate, and the comfort of a lakou filled with the sound of laughing children. My mother was our first country- the first place we ever lived- yet she made sure we knew that Haiti was home. My mother spoke so much about the Haiti of her childhood that, when I first visited Cap- Haitien almost two decades after the country’s political turmoil uprooted her and took the lives of so many she’d loved, I found myself tracing her footsteps through the as if I’d never left. Although she raised her three children in Miami, Florida, Haiti loomed over our imaginations and defined our childhoods through the stories she weaved to connect us back to our roots like a bridge over troubled waters. Josie Francois crossed the ocean, earth, and skies to nourish the dreams of a better life in this land of opportunity. So often, we hear immigrant stories that glamorize the relentless struggle but, for us, hers was a lesson in how one must wilt before you bloom. I have as vivid memories of the hard choices my she made, the low wage jobs she took, and the abuses she endured as I do about the family trip to Disney World my parents took us on just see the smiles on our faces, the library books my mother read to us to broaden our worldview, and the long hours she worked to to create opportunities out of ideas. Her boundless capacity to share her love as well as those she loved meant that she mothered many children beyond just her own and left us with many other mothers to guide us. Family for her simply meant those that carried your heart in theirs. As such Jackson and Noel were like brothers to her and fathers to us- examples of how men loved. Our ever-growing networks of aunts, uncles, and cousins, the Haitian community of Miami and Emmanuel Baptist Church, and her friends and neighbors like Grace and Marie Aubord- all became family. Her nurturing nature led her to pursue a career as a nurse when she immigrated to Miami. She stayed up late studying for one nursing exam after another, moving her way up from a home health aide to become a licensed practicing nurse while still managing to cook worldclass meals and put three kids through college. She valued education as the only true means to freedom. She touched the hearts of everyone she came in contact with. She would cry when her patients died and felt personally wronged when someone treated them unjustly. At the height of the fear, hate, and uncertainty around the AIDS crisis, she sat with a dying gay man and held his hands as he took his last breathwhen even his own family refused to see him. She poured her entire soul into others without ever expecting anything in return. She taught us to stand up for injustice and speak up when we saw others being abused whether it was by an individual or by the system, even taking us out of class to attend protests when we were younger. When other parents would have warned us against rocking the boat, my mother was never prouder than when she saw me on TV or read an article I wrote. It is through her unwavering commitment to humanity that I learned what true Christian compassion and sacrifice meant. She painted the world with the kindness she wished to see. She reinvented herself and rebuilt her life so many times that I often found myself getting to know her anew. For example, she never allowed me to wear jeans to school, saying that they were unladylike even when I was in high school. Even to this day, I only own 3 pairs of jeans yet I came home from grad school one year to find that she had reinvented herself into a skinny jean wearing siren with a short new hair cut and red lipstick. She immediately declared my knee length dresses to be “old fashioned” ! She conquered her fears and became an avid traveler in the past few years, regaling anyone who would listen with stories of her cruise ship adventures. That’s the kind of person she was- constantly evolving to become a better version of herself and challenging you to evolve with her. Often when you hear the obituaries of women, it defines them simply as wife, mother, and loving daughter. My mother was all those things and so much more- she was a survivor that rebuilt a new life many times on the ashes of the old. She was a songbird that filled the night with the sound of her voice to guide us home. She was a teacher that taught us how to love unconditionally and give selflessly. She was a woman of God that knew that how she treated the most lowly was a reflection of how we loved Him. She was the sun that allowed the seeds she planted to flourish long after she’s gone. She was the woman I strive each day to become. Josie passed away on the night of April 29, 2020, coming home from a job that she loved. She is survived by her 3 children, France, Josue, and Karen Francois as well as her sister, Suziane Predestin, and her niece and nephew Smitha and Silvio Predestin. In her death as in her life she’s given us the courage to go where we are loved and shape our world in the image of her love.

Josie Francois was my mother. She was born to Sionem Predestin and Elizan Guerrier in Cap-Haitien, Haiti in 1961. Surrounded by the love of a very large and tight- knit family, she was the 2nd of 8 children. When she talked to us about her childhood... View Obituary & Service Information

The family of Josie Francois created this Life Tributes page to make it easy to share your memories.

Josie Francois was my mother. She was born to Sionem Predestin...

Send flowers to the Francois family.