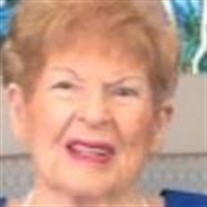 Marilyn Schneider, known as “Miss Marilyn,” of Rainberry Bay, Delray Beach, Florida, passed away at her home on Tuesday, February 4, 2020 at age 95. She was married to Robert Leonard Schneider, known as “Len,” who passed away on December 15, 2019 at the age of 100. They were partners in life and in business and were married for almost 73 years. She is survived by her daughter, Joan Schneider of Brookline, MA and her life partner Jonathan Brucks of Foxboro, MA. She was the daughter of Rose Hammer and Joseph Newman of Newark, NJ and mother of Holly Schneider, of Scranton, PA and Delray Beach, Florida who passed away in 2011. She was the sister of Irving Newman of Sarasota (deceased) and sister-in-law Bea Newman, who introduced them in 1946. Marilyn was aunt to Jeffrey Newman and his wife Eileen and Lenny Newman and his wife Marie, of Denver Colorado, Deb Sklar of Delray Beach Florida and Peter Sklar of Bristol Tennessee and his wife Lynn. She was great-aunt to Tara Sklar of Washington, DC and Mikey Sklar of Truth or Consequences, New Mexico and cousin to Linda and Phil Kessler of Riverdale, NY, Rabbi Peter Kessler of Harrisburg, PA, David and Nancy Bashover of Denver, Colorado and Raye Scott of San Diego, California. She enjoyed lifelong friendships with Marion and Paul Caruso, Gerry Creedon, Daria Dolhy, Steven Joseph, Lilian Bronson, Kendall Aspinwall and Sylvia Cruz. Marilyn, born in Newark, New Jersey on January 30, 1925, graduated from Weequahic High School and attended Fashion Institute of Technology in New York. She married Len on January 11, 1947, and supported his career, first through taking care of their children and then working with him at Plainfield Surgical Supply in New Jersey and Scranton Surgical in PA. Marilyn handled the retail portion of their medical supply company and specialized in helping women who had cancer. She was involved in the community wherever she lived serving as a Girl Scout leader, a volunteer at the Veterans Hospital and as President of ORT in Delray Beach, Florida. Her biggest passion, aside from going to the casino, was helping children from the S.D. Spady Elementary School in Delray Beach, learn to read, do math and cope with adversity. Ms. Marilyn, was awarded the Points of Light Award by Governor Jeb Bush in 2002 and the Volunteers Are Special Award by the School District of Palm Beach County School Department of Career and Community Education in 2000, the Outstanding Volunteer Award from the S.D. Spady Montessori Magnet Elementary School in 2002, the Outstanding Senior School Volunteer of Palm Beach County in 2004 and again in 2012. She also received the Heart of the Community Award from the Listen to the Children Program in 2008. Marilyn touched the lives of hundreds of children as a mentor in the Mental Health Associates Listen to the Children Program. To honor her daughter Holly’s passing, she and Len raised money to buy books for the Spady library and introduced the “Reading is Cool,” program. On Thanksgiving and Christmas, they donated turkeys and toys for 20 families. Marilyn’s motto was Never Ever Give Up, something she taught her own children and those at Spady School. She was an astute businesswoman, loved politics and the stock market, never turned down the opportunity to write a scathing anti-Trump OP Ed for the Sun Sentinel or to bet on a sporting event. She was a colorful person who made a real impact on the world. A graveside service will be conducted by Rabbi Peter Kessler of Harrisburg, PA at 12:30 pm on Friday, February 6, 2020 at Beth Israel Cemetery in Woodbridge, New Jersey. A lunch at Harold’s in Edison, NJ will follow to honor the family’s love of deli. In lieu of flowers, the family would appreciate donations to S. D. Spady Elementary School Library, 901 NW Third Street, Delray Beach, Florida 33444.

The family of Marilyn Schneider created this Life Tributes page to make it easy to share your memories.

Send flowers to the Schneider family.