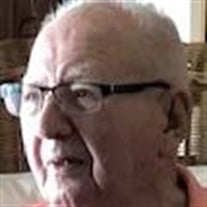 Robert Leonard Schneider, known as Len, of Rainberry Bay, Delray Beach, Florida, passed away at home on Sunday, December 15, 2019 at age 100. He is survived by his wife of almost 73 years, Marilyn Newman Schneider and daughter Joan Daryl Schneider of Brookline, MA and her partner Jon Brucks of Foxboro, MA. He was the son of Goldie and Clarence Schneider of Newark, NJ and father to Holly Schneider (deceased) of Scranton, PA and Delray Beach, Florida, was a brother to Miriam Sklar (deceased) and uncle to David Sklar (deceased) of Delray Beach, Florida and his wife Deb Sklar and Peter Sklar of Bristol, Tennessee and his wife Lyn. He was great uncle to Tara Sklar of Washington, DC and Mikey Sklar of Truth or Consequences, New Mexico, Harry Sklar of Marion, Illinois and Shara Sklar of Marion, Illinois and Miles Sklar, DMD of Colorado Springs, Colorado and cousin to Linda Kessler and her husband of Riverdale, NY and Rabbi Peter Kessler of Harrisburg, PA. Len, born in Newark, New Jersey, graduated from Central High School in Newark and attended City College of New York. He served in Pattens Army in World War II, landing on Utah Beach four days after Normandy. He couldn’t swim, so his biggest fear was not the Germans, but drowning when he had to swim ashore. Before the war, he was a court stenographer and landed a job as assistant to the president of a steam ship company which was transporting soldiers overseas. Len was drafted and found himself on one of his company’s ships. He knew the captain and instead of eating at the soldier’s mess, he ate at the captain’s table, which displeased his superiors. When stopped by a general and asked, Schneider where is your weapon, Len replied, “my pen is my weapon sir,” not the perfect response for a sergeant. He served as a court stenographer for the Judge Advocate Corps and set up governments across Europe as the Americans took back territory taken by the Germans. Len entered the medical supply business when he returned from the war. He and his wife Marilyn bought Scranton Surgical Supply, in Scranton, PA which they successfully operated until Len retired in 1984. They moved to Delray Beach, Florida where they have lived ever since. Len built their business in Scranton from the ground up. A talented entrepreneur, he had an incredible work ethic---nothing was too big or small for him to take care of for his clients. He was a great salesperson, excellent at customer service and could fix anything. He could talk to anyone and had an amazing memory—he kept every product and price in his head in the days before computers. He was a brain. When he was young, Len and Marilyn liked to play tennis. Len loved watching basketball, football and tennis on TV. If it had a ball, Len liked watching it. College ball, women’s basketball, Wimbledon—you name it, he watched it. He loved playing slot machines in Las Vegas and the casinos in Florida. Len was introduced to Marilyn, by her brother Irving Newman and his wife Bea. It was love at first sight and they would have been married for 73 years on January 11, 2020. Len was a great husband, totally devoted to Marilyn and his kids, Joan and Holly. Len was a great storyteller. He loved to learn and taught himself about the stock market and investments. He managed his money and spent a lot of time learning about investments. He gave his children good advice: work hard, treat people well, read, learn all you can about what you’re interested in, roll with the punches, don’t let people get to you—and never ever give up. A man of his word, Len promised his daughter Joan that he would make it to his 100th birthday, and he did it. Len was a great husband, father and good friend and he will be missed. A graveside service will be conducted by Rabbi Peter Kessler of Harrisburg, PA, a family member, at 1 pm on Wednesday, December 18, 2019 at Beth Israel Cemetery in Woodbridge, New Jersey. A lunch at Harold’s in Edison, NJ will follow to honor Len’s love of pastrami. In lieu of flowers, the family would appreciate donations to the Michael J. Fox Parkinson’s Foundation, P.O. Box 5814, Hagerstown, MD Robert 21741-5014 or at michaeljfox.org.

The family of Robert Leonard Schneider created this Life Tributes page to make it easy to share your memories.

Send flowers to the Schneider family.