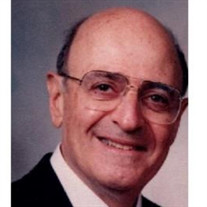 Sherwin Fishman, 89, of Tamarac, Florida died on Saturday September 12, 2020 after a long battle with dementia. He leaves behind his loving wife of 27 years, Laurice (nee Sorkin), as well as Laurice’s children, Rabbi Jordan (Cynthia) Parr, Aric (Deita Besemer) Parr and Faith (Steve) Shapiro, as well as six grandchildren: Rebecca Parr, Sarah (Sam) Starobin, Asher (Vishakha Mathur) Parr-Besemer, Roqhaelle Parr-Besemer, Aaron Parr-Besemer and Luca Shapiro. He is also survived by his sister, Phyllis Fishman of Las Vegas, Nevada. Sherwin was born to Sam and Rose Fishman (nee Fried) on June 11, 1931 in Detroit, Michigan. He graduated the University of Michigan with a DDS and MPH. He also had earned his BS degree at Wayne State University in Detroit. An army veteran with a tour in Korea, Sherwin was a Professor of Dentistry, first at the University of Kentucky and later at Virginia Commonwealth University in Richmond. Upon his retirement, Sherwin and Laurice relocated to Sarasota, Florida where they lived before to moving to Tamarac, Florida. While in Sarasota, Sherwin volunteered at the Senior Friendship Center Dental Clinic and Selby Botanical Gardens and, along with Laurice, became an avid bridge player. Among his many interests, Sherwin loved to ski, listen to classical music, travel, tend to his orchids, enjoy Japanese culture and sing in various choirs. They even traveled with the Key Chorale of Sarasota to perform in Eastern Europe. He also cherished the honor of chanting the Second Day of Rosh HaShanah Haftarah each year at Temple Sinai in Sarasota. And he especially cheered on his beloved Michigan Wolverines on Saturday afternoons. Burial will take place at Beth David Memorial Gardens Cemetery on September 15, 2020 at 11:30 AM EDT (10:30 AM CDT) via ZOOM. Rabbi Marc Labowitz will officiate. When: Sep 15, 2020 11:30 AM Eastern Time (US and Canada)     Viewneral™ Service Name: Sherwin R Fishman Please click the following link to join: https://viewneral.zoom.us/j/98297262262?pwd=MnhYbnFoZWY0c0txLzFGSlVyRTNKQT09     Password: 044456 There will be an online Shivah Minyan at 7:30 PM EDT (6:30 PM CDT) on September 15th, also via ZOOM. Join Zoom Meeting https://unt.zoom.us/j/95838051007 Meeting ID: 958 3805 1007 In lieu of flowers, donations may be made to: Daniel D. Cantor Senior Center, 5000 Nob Hill Road, Sunrise, FL 33351.

The family of Sherwin Fishman created this Life Tributes page to make it easy to share your memories.

Send flowers to the Fishman family.