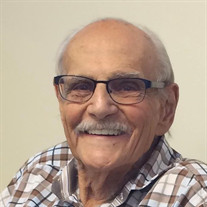 Raisen--Stanley On Monday, October 1, 2018, Stanley Raisen passed away at home at the age of 90. Born in the Bronx, New York in 1928 to Louis and Ida Raisen, Stan graduated from DeWitt Clinton High School and City College of New York, and then served honorably in the U.S. Army in 1946 and 1947. Stan married the girl of his dreams, Selma (Gold) Raisen, in 1952 and together they raised their daughter Hilary Raisen-Fein (Steven), and sons Jeffrey Raisen (Mary) and Ivan Raisen (Armando) in Massapequa, New York. In 1989 Stan retired and he and Selma moved to Florida, initially to Boynton Beach and then to Coral Springs. As a young man Stan worked for UJA and then the American Israeli Cultural Foundation in public relations. He then served for many years as the Director of Special Events for the United Nations Association of the USA, where he used his skills to organize the annual United Nations Ball, Economic Conference Dinner, Kennedy Center Concerts in both NYC & Washington DC. He associated with domestic & foreign dignitaries as well as several world renowned artists and musicians. Stan loved playing golf and tennis, and he played regularly well into his latter years. But Stan's true passion, other than his family, was telling his jokes. He had a joke for every occasion. Stan is survived by his wife of 65 years, Selma, his children, Hilary, Jeffrey and Ivan, his grandchildren Justin, Jeremiah, Jessica and Michelle, and his great grandchildren James and June. Interment and a graveside ceremony will be held on Wednesday, October 3, 2018 at the Eternal Light Memorial Gardens, 11520 State Road 7, Boynton Beach, FL. An additional memorial service for the residents of Park Summit will be held in a room adjacent to the dining area of Park Summit on October 3, 2018 at 2:30 P.M. The family will sit shiva from 4:00 P.M. to 8:00 P.M. on October 3, 2018 at the Park Summit in Apartment No. B-124, 8500 Royal Palm Blvd., Coral Springs, FL. Memorial donations may be made to the American Heart Association, P.O. Box 840692, Dallas, TX. 75284-0692.

Raisen--Stanley On Monday, October 1, 2018, Stanley Raisen passed away at home at the age of 90. Born in the Bronx, New York in 1928 to Louis and Ida Raisen, Stan graduated from DeWitt Clinton High School and City College of New York, and... View Obituary & Service Information

The family of Stanley Raisen created this Life Tributes page to make it easy to share your memories.

Send flowers to the Raisen family.