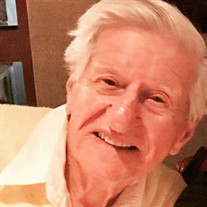 Jack Yarmosky passed away at home in Boca Raton Florida on May 21 at the age of 99. He was a resident of Baltimore, Maryland for much of his life, before moving to Florida in 1989. Jack is pre-deceased by his wife of 61 years, Shoshanah Levy Yarmosky. He is survived by four sons: Louis Yarmosky and his wife MaryAnn of Cape Cod, Massachusetts; Michael Yarmosky and his wife Amy of Poughkeepsie, NY; Steven Yarmosky and his wife Mary of Richmond, MA; and David Yarmosky and his wife Sally Howe of Potomac, Maryland. He had 12 grandchildren: Lauren Yarmosky, Brian French, Kevin French, Jeffrey French, Sarah Bard Kemink, Jason Bard Yarmosky, Alena Yarmosky, Alex Yarmosky, Elyse Yarmosky, Jessica Yarmosky, Scott Yarmosky, Matthew Yarmosky, Brandon Howe and Andrew Howe. He also had 9 great-grandchildren: Jack and Libby Ballinger, Ethan and Ava French, Stella and Lucy French, Aidan French, Madeline Bard Kemink and Oliver Bard Kemink. Jack was born in Baltimore Maryland on December 23, 1921 to Louis and Sophie Yarmosky. He had an older sister, Anne. After his father’s passing when Jack was three, the family survived by running a dairy store out of the front room of their row house. For the next 16 years, with Jack and his sister pitching in, they ran a successful business until Sophie remarried in 1942. Upon graduating from City College in 1939, Jack attended University of Maryland Pharmacy School. After graduation in 1943, he entered the Maritime Service, where he rose to Chief Pharmacist Mate on the ship, American Mariner. While in the service, Jack met Shoshanah Levy, a Jerusalem native, who was helping to care for his mother while she was in the hospital. They married 6 months later in 1945. Jack worked for several pharmacies after leaving the service. In 1952 at the age of 32, Jack purchased a drugstore at 2501 Edmondson Ave in West Baltimore, moving into the apartment on the second floor just above the pharmacy as his new family home. Over the next 20 years, his hard work, determination, and ingenuity transformed a struggling entity into a successful business, eventually moving the family in 1957 to a new home in Northwest Baltimore. A loving and loyal husband and father who always put his family first, he was a “mensch” in every sense of the word. Known for his honesty and decency, he set a lifelong example for his children. During their Baltimore years, Jack and Shoshanah developed many close and lasting friendships. They became involved in professional, pharmaceutical, charitable and social organizations. After selling the pharmacy in 1972, Jack worked at two pharmacies owned by a neighbor and friend over the next 17 years. In 1989 Jack and Shoshanah decided to retire and moved to Boca Raton, Florida. They spent many wonderful years there, becoming involved in a wide range of community activities. Toward the end of Shoshanah’s life, Jack was her heroic caregiver, showing the same love and loyalty that was the hallmark of his life. Years after Shoshanah’s passing, Jack met Claire Levine and developed a close friendship that lasted until his passing. A funeral service for the immediate family will be held on June 9 at Eternal Light in Boynton Beach, Florida.

Jack Yarmosky passed away at home in Boca Raton Florida on May 21 at the age of 99. He was a resident of Baltimore, Maryland for much of his life, before moving to Florida in 1989. Jack is pre-deceased by his wife of 61 years, Shoshanah Levy... View Obituary & Service Information

The family of Jack Yarmosky created this Life Tributes page to make it easy to share your memories.

Jack Yarmosky passed away at home in Boca Raton Florida on May...

Send flowers to the Yarmosky family.