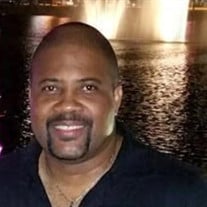 Keith Leonard McCray was born on September 11, 1966 to Earl and Cynthia McGinnis, Sr. He is one of four siblings and a proud graduate of “The Mighty Rams” of Eastside High Class of 1984 School and Florida A&M University College of Electrical Engineering Class of 1991. He was raised in a Christian home and accepted Christ in his early young adult formative years at Springhill Baptist Church. Keith was committed to daily early morning time with God praying, studying and reading his bible daily. It didn’t matter where Keith was, he it made it a priority to pray and cover his family in prayer. In his earlier years after graduating from FAMU, Keith returned home to Gainesville in order to save money and get established. He landed a job with the Alachua County School Board teaching at A. Quinn Jones Exceptional Student Center as a substitute teacher and then given the opportunity to become a full time Educator. During his tenure at A. Quinn Jones, Keith was known as the disciplinary resource to his colleagues. His ability to redirect and guide his students was uncanny. Keith demanded respect from those students and over the course of his tenure at A. Quinn Jones, that respect was given freely. Keith would eventually relocate to south Florida where he settled down and started his family. He continued to teach with both Broward and Dade counties. Sometime in 1998 Keith and his family moved to the US Virgin Islands and spent a short time there as an Electronics Engineer. By 2000 the family moved back to Florida and furthered his teaching career in Dade county. Soon after, Keith began working in the Electrical Engineering Industry where his passion for contract work began. In addition to engineering, Keith was also started to develop his business savvy. He would often speak on business ownership, investing and real estate. He always approached life’s challenges with good intentions; however, life as we know it sometimes take left turns. Sadly, his marriage and business investments were of no exception and took its toll on him for a season. Yet just as seasons change, Keith kept his faith, learned from his losses and a new, wonderful chapter began. Fate would have it that Sherron Richards was looking through some photos on a dating website her daughter join, when she picked out a photo of Keith. She immediately identified Keith as “the perfect match” for her daughter, Diana. After some time, Diana finally agreed to go out with Keith after two long months of telephone contact. Little did they know that is where the love story begins. Keith and Diana were married in a fairy tale wedding on January 27, 2013. The two merged and became a cohesive, blended family creating the perfect union. Keith and Diana adored their blended family: Kamisha, Jordan, Imani, Janiah, Josi-ah, and Jared. Keith also made it official that in the creation of their new family that all will share a common bond. All will carry the surname of McCray solidifying the love he had for Janiah and Josi-ah as his own. Keith was intentional on being a good father to his children and always desired to be an active “Pops” in his children’s lives. Together Keith and Diana created D & K Enterprise of South Florida. Their plan is to build and invest in engineering and cyber security which was Keith’s passion. His focus was educating young African American men about the field of engineering and the opportunities that the field offered. Keith love sharing what he knew with all who would listen. He believed so much in people and their dreams and aspirations. Keith would make any person believe they were capable of achieving anything. He made all feel special if you were around him. Keith encouraged and inspired so many people especial his children. His mission was to leave a legacy of generation wealth for his children and his children’s children. As he completed his journey to his home in Glory, he leaves to cherish his memory: the love of his life, Diana McCray; six children: Kamisha (Atlanta, GA), Jordan (Miramar, FL), Imani (Atlanta, GA), Janiah and Josi-ah – Orlando, FL, and Jared (Miramar, FL); one grandchild: Milo McCray (Atlanta, GA). His parents, Earl and Cynthia McGinnis, Sr (Gainesville), in-loves Richard and Sherron Richards-Benitez (Tamarac, FL); Siblings Reggie “Hash” Goode (Richmond, VA), Earl McGinnis, Jr. (Darrcelle) – Dacula, GA, and Brian (Jamila) – Ocala, FL; a devoted and adored grandmother – Loretta McCray (Flemington, FL), proceeded him in death paternal grandmother, Willobie Howell- McGinnis; a host of nieces, nephews, aunts, uncles, cousin, dear friends, mentees and business associates.

Keith Leonard McCray was born on September 11, 1966 to Earl and Cynthia McGinnis, Sr. He is one of four siblings and a proud graduate of &#8220;The Mighty Rams&#8221; of Eastside High Class of 1984 School and Florida A&M University College of... View Obituary & Service Information

The family of Keith McCray created this Life Tributes page to make it easy to share your memories.

Send flowers to the McCray family.