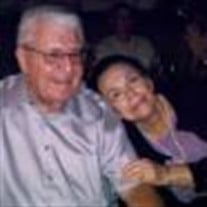 Muriel Davidovitz Freedman January 20, 1930- March 30, 2020 Muriel Freedman passed away on Monday, March 30 at Harborchase senior living community in Wellington, Florida. She had moved there recently after retiring to Boynton Beach, FL in 1997. Muriel, otherwise known as Midge to those close to her, was a real “pistol” growing up. She was top of her class, pretty and vivacious and dated virtually every one of her soon-to-be husband’s friends before choosing him as her lifelong soulmate. She graduated from Chelsea High School in 1948, belonging to a uniquely large and devoted circle of high school friends. In her retirement years, they attended Chelsea High School reunions held in FL that drew as many as 400 alumni. She married William Freedman on December 18, 1949 in a small, personal ceremony in her parents’ home. She spent the last years of her 70 year long marriage repeatedly telling anyone who would listen how fortunate she was to have the best husband in the world. By 1958, after moving to Manchester NH, they had three children, Scott , Renee and Karen and their family was their fiercest commitment, passion and source of pride. They developed deep-rooted bonds with their Manchester friends while raising their families together. This led to the entire group retiring to within a 10 mile radius of one another in Florida. She was no stranger to adversity having grown up during the Depression and World War II. The street smarts, grit and determination that this instilled in her was what got her through many of her life’s future challenges. Midge was a neighborhood “Dear Abby” to more than one teenage girl outside of the family who needed a confidante. She was a feminist before it was trendy and was strongly committed to equal rights and treatment for all, having grown up as a first generation minority American citizen. She was a talented Language Arts student, an avid reader and a formidable Scrabble opponent. She finished the NY Times crossword puzzle by noon every Sunday except for the last few years of her life. She volunteered teaching immigrants English as a second language and welcomed each of her students into her home, as family. Muriel was fearless and resilient in undertaking new job opportunities and over the years was employed as a retail jewelry clerk, a bookkeeper, Secretary of Temple Israel in Manchester NH, volunteer in a wartime air traffic control tower, car salesperson, bookstore owner and industrial drapery designer/salesperson. She was a loving and doting grandmother. Despite living 1,000 miles away from her grandchildren, she was determined to develop an authentic relationship with them. No song was too silly to sing together, no craft was too cheesy to make together. She initiated Hotel Week in Maine and built a lifetime of memories with them. Midge will be remembered as a deeply loving and loyal wife and mother. She was a champion of simple values - family first, education, independence, persistence, supporting the underdog, the power of relationships with friends and family and commitment to being your best version of you . She is predeceased by her parents, Harry and Rose Davidovitz and her four siblings, Minna Zinser, Ethel Herson, Ruth Goldstein and Phillip Davidson. She is survived by her husband of 70 years, William Freedman; their son, Scott Freedman and his wife Linda of Falmouth, ME, their daughter, Renee Freedman of Leverett, MA and their daughter, Karen Freedman and her husband, David of Bath, ME; their four loving grandchildren, Cassandra Freedman Sowles and her husband, Matt, Kelsey Freedman, Maxwell Rawson and Lucy Rawson; and their great granddaughter, Eleanor Sowles. A memorial service, handled by Jewish Funeral Home, Portland, ME will take place in May at the Southern Maine Veteran’s Cemetery in Springvale, Maine. In lieu of flowers, donations can be made to Temple Israel of Manchester, NH.

The family of Muriel Freedman created this Life Tributes page to make it easy to share your memories.

Send flowers to the Freedman family.