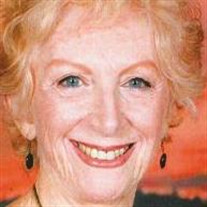 Wilma was the youngest of the three beautiful daughters of Gert and Bernie Bernstein: Evelyn, Myrna and Wilma - the 3 redheads! They all had their father’s delightful sense of humor and his wonderful laugh. The family moved from Philadelphia to York, PA when Wilma was 5, then moved to Lancaster, returning to Philadelphia when she was ten where she met the girls who would become her lifelong friends - Natalie, Barbara, Flossie and Betty. The 5 of them - with Myrna - lived in the same neighborhood, sent their kids to the same schools, traveled together, threw great parties and stayed the closest of friends for 80 years! Wilma met her husband Sam Silver on the dance floor when she was 20 and they were married within the year. Sam was 11 years her senior which so concerned the family that Myrna’s husband Harvey Springel investigated Sam’s background! He passed and was Wilma’s dear husband for 50 years of marriage during which she had three children: her dear daughter Bonnie Handel who predeceased her by a year, Bonnie’s twin sister Linda Wanfried, and son David Silver. Her children gave her four grandchildren who she adored: Stacy Silver, Joanna Wanfried, Todd Silver and George Wanfried. Wilma loved her life in the suburb of Philly known as Laverock (at the time of her death she was writing a book about living her life in “Loverock”)! But when Sam retired they moved down the shore to a beautiful home in Margate, New Jersey. They had taken up golf and used to joke that golf was not a matter of life and death, “it’s much more important than that!” When Wilma was young her parents did not have the money to send her to college but when she was married, while her children were in college, Wilma also enrolled, graduating from Temple University with a degree in Health Education which she used to good effect becoming an instructor with the Pennsylvania High Blood Pressure Control Group where she taught many people how to use a “sphygmomanometer” - a word she never tired of pronouncing! In 1995, having successfully launched their children into good lives, they moved to sunny Pompano Beach, Florida! Outgoing and affable Wilma quickly made many great new friends in Florida with whom she became extremely close while staying close to her childhood friends and her Margate New Jersey friends. Wilma and her dear beloved sister Myrna had always found a way to live near one another and Florida was no exception as they both began fun new lives in Pompano! From playing under the blankets as children to playing bridge at the senior center 89 years later they were as close as two people can be, talking to one another every day. Sadly, Wilma’s dear husband Sam became afflicted with Parkinson’s disease and died leaving her alone. With her enthusiasm and personality though, she soon met a new man who became the second love of her life, Harvey Goodman. Harvey was cultured and well educated; they took many marvelous trips together and enjoyed many fun times. Sadly, Harvey Goodman died in 2018, leaving her alone again. Not long after her move to Florida Wilma became active in the local Democratic Club and soon became its president. One of the greatest experiences of her life was being chosen to be a delegate to the Democratic convention in 2008 which nominated Barack Obama to be President of the United States. While at the convention, she was interviewed by news media from around the world and even appeared on television! With great drama, she cast a ballot, playing a role in American history. Wilma led a full active life. She was beloved by friends and family for her positive nature, ready laugh and warm kindness. She left her entire family rich with memories of good times and love. A memorial service will be held on Tuesday, March 3, 2020 at 2:00 pm at Alexander-Levitt Funeral & Cremations, 8135 W. McNab Road, Tamarac, Florida 33321.

Wilma was the youngest of the three beautiful daughters of Gert and Bernie Bernstein: Evelyn, Myrna and Wilma - the 3 redheads! They all had their father&#8217;s delightful sense of humor and his wonderful laugh. The family moved from Philadelphia... View Obituary & Service Information

The family of Wilma Silver created this Life Tributes page to make it easy to share your memories.

Wilma was the youngest of the three beautiful daughters of Gert...

Send flowers to the Silver family.